Executive Summary: Why ‘face-to face’ is the most effective way to communicate: Non-Verbal cues are necessary components in all business communication: A linguistic explanation. 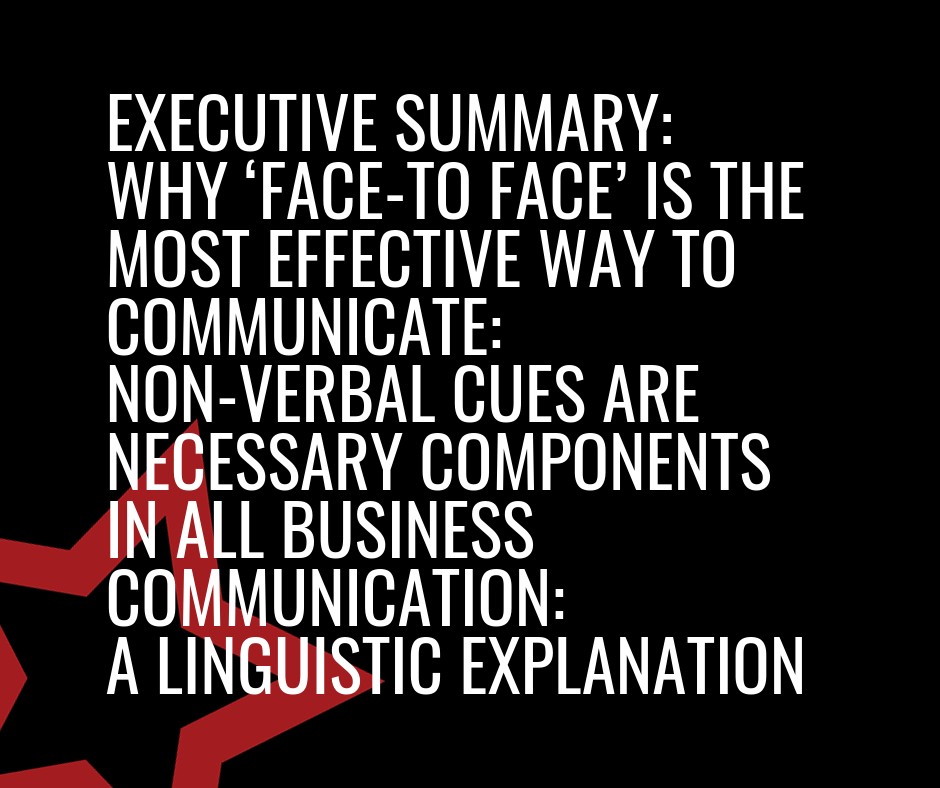 What makes us Human, and what makes an organisation tick?:

Language is symbolic communication,  that is productive, structured by grammar.

‘Productive’ means that limitless concepts can be constructed and conveyed using limited tools: each language has a finite number of words (lexicon), yet these words can be combined to describe all we can conceive of.

‘Grammar’ refers to the rules and structures of language.

Language is not just speech:

Oft-times people perceive language as meaning ‘speech’. Not so: De Saussure (1916), (widely regarded as the progenitor of modern linguistics), stated Langue is not to be confused with human speech. So what then are the forms of language? In terms of the modalities available for conveying meaning, linguists define Natural Language as consisting of cues transferred both via the verbal channel and the non-verbal channel.

The verbal channel consists of vocalised words and the written word. During speech, non-verbal cues accompany all verbal cues.

The nonverbal channel refers to units of meaning conveyed by the following vehicles: gesture (including oculesics), expression, tone, intonation, volume, métier, non-verbal interjections (such as laughter, growling, spitting out your drink in surprise), and turn-taking. Even proxemic cues can influence the meaning of an utterance. It’s a fascinating subject.

Intonation: An obvious example of a non-verbal modality:

The English Language, in all its’ variegated glory, is what’s known as an ‘intonational language’. This means that each utterance, (most commonly structured in the form of a sentence) is delivered with an accompanying ‘tune’ (consisting of variations in pitch) applied along the length of the utterance. This ‘tune’ is called intonation. Intonation is clause specific.

Now we understand what is intonation let’s apply that knowledge to our analysis of a telephone conversation in English.

When I read aloud these two different deliveries of ‘hello’ I note the following intonation events:

If you (the reader) were to repeat these two utterances back to back, would you infer any kind of mood, or social intent from the different intonations? If English is your ‘Mother Tongue’ (and you are not hearing / pronunciation impaired / suffering related brain impairment) you will derive differing meaning from each of the two utterances based on their intonation. That’s how an intonational language works.

These three definitions will aid in understanding the rest of this article:

Pragmatics: The study of converting abstract internal meaning into a transferrable code: Which then can be shared with an interlocutor (the person we are communication with).

Semantics: The study of converting that transferrable code into an abstract meaning upon reception. If 100% efficient communication has occurred then the recipients’ semantic understanding is the same as the pragmatic meaning transmitted.

Face-to-face is best, but it could still be better:

We tend to think that what we say is what is heard, and that communication within our organisations is efficient. The science would suggest otherwise I’m afraid: even under circumstances most conducive to communication, due to the emotional and social ‘noise’ we experience at all times, we’re not nearly as good at transferring non-social information as we’d like to think we are. An example: In a face-to-face exchange between university students of the same language group (Canadian English) where both interlocutors wish to exchange information regarding very simple concepts, one study (Li 1996) has shown there to be a maximum actual information exchange rate of 75%.

How much communication occurs on the non-verbal channel?

How much nonverbal information is exchanged in dyadic interaction? There are estimates ranging from 66% (Birdwhistell 1970) to 93% (Mehrabian 1972). The most palatable estimate (which does not contradict either of the above) is over 55% (Klopf & Park 1982:72). Non-verbal communication (NVC) is important!

Haviland (2004) describes kinemes as often being characterized by their language-like-qualities on one hand and their divergence from language on the other. Body language is so important to communication that various taxonomies have evolved to codify it. Here is a brief outline of some commonly referenced definitions of kinemes:

McNeill (1992) adds the following categories to this base:

The most commonly cited taxonomy is that Ekman & Friesen (1969) who use only four categories.

Miscommunication on the nonverbal level creates misunderstanding on a general level:

Here’s a super important concept: Miscommunication on the nonverbal level creates misunderstanding on a general level (Schneller 1986; 1988). Nonverbal communicative signals accompany the processes of cognizing verbal interactions in their passage through the brain during semantic processing. Kinemes (body language cues) are strongly posited as being processed like the spoken word.

It is worth noting that if there is a discrepancy between verbal and nonverbal language, it is the latter message which will be believed. For example were one to say ‘I am very happy’ but their teeth are clenched, eyes wide open, with ‘a furrowed brow’, we are not likely to believe their statement of happiness. The non-verbal cues override the verbal cues. That statement alone would suggest the enormous importance of access to visual communicative cues during all important business communication.

Communication does not equate with understanding: Meaning is negotiated:

Communication does not equate with understanding; that only occurs when both parties have the same interpretation of communication symbols: Interactants engage in a ‘conversation contract’. However, a contract is only of worth to both parties if they understand how it works. Therefore any important business interaction must include the maximal amount of communicative cues to elicit understanding.  To do so requires visual communication: Tartters’ (1983) shows that in dyadic interactions between two parties of the same language group, if one party does not know they are being monitored on the visual channel (when in fact they are), understanding for both parties decreases further than the already paltry 75% mentioned earlier. This shows our communication transmissions are channel specific and only modified when the transmitter is aware of the need for modification (Schneller 1988). This awareness of the need to modify is a key issue in organisational communication. When relying on non-visual cues (such as when using a telephone) the visual cues of miscomprehension on the part of the interlocutor are missed, with the result being a far higher incidence of miscommunication.

What was said will be overshadowed by how it was said.

Affect before Cognition: Emotion over information:

As terrifying as it seems, we actually ascribe an emotional response to something before we know what it is we’re thinking about! Apply this knowledge to social interaction during a meeting / training session / disciplinary: If we’re not armed with all the social information available, the risk of an interaction failure is enormous. The slightest miscommunication can trigger a series of events based on a negative affective response being applied to the Interlocutor before one even understands what is the apparent faux pas being ascribed them. When we have misunderstood our interlocutor we feel bad about them before we know that we have misunderstood them or why.

They keep popping up: The better than average effect, and cognitive dissonance:

Having considered above the many ways we can misunderstand each other, add the apparently universal ‘better that average effect’ (Larwood & Whittaker 1977; Regan et al. 1975; Svenson 1981), where the individual feels they possess notably above average skills in a given field (in this case it would be interpersonal skills), and the ground is laid for the commonly occurring situation described by Jones and Nisbett (1972), where the interlocutor is ascribed negative personal traits resulting from miscommunication based on incomplete  exposure to communicative cues: The interlocutor is blamed because actors tend to ascribe their own undesirable behavior to environmental factors, whereas observers ascribe them to the actors’ personal characteristics. Thus, when the interlocutor is judged as not adhering to the rules of the ‘conversation contract’, a personality/psychological idiom is readily available to explain their behavior: their rudeness, stupidity etc.

Imagine the interlocutor has annoyed you, but you still have to be nice to them. The result will be more annoyance. Why? Because people’s true attitudes toward an object become more accessible immediately after indicating an attitude that they know to be false, such attitude dissimulation might paradoxically cause the initial unfavourable attitude to have a stronger effect on subsequent judgments (Maio & Olson 1997); including the judgments of the interlocutors communicative capacity.

Everyone knows this stuff, which is why we still have face-to-face meetings. But what can be done to save money?

Communication is a big issue. Careers are built on communicative competency and companies crash as a result of poor communication. Knowing that face-to-face communication is the most effective way of doing things, companies spend a lot of money transporting important staff to important meetings; for fear of losing communicative efficiency if the required parties can’t communicate in person. Surely this expense can be reduced somehow? If we need to ensure at least audio-visual communicative modalities, then the closest substitute for face-to-face communication is high quality videoconferencing. With recent progress in videoconferencing technology, hardware and software prices are dropping to the point where increasing numbers of companies find videoconferencing installations more cost effective than despatching management nationally and internationally to attend meetings that can occur just as effectively online. We still need to see each other clearly, but we don’t always need to be in the same room when so doing.